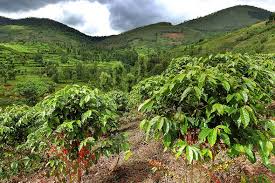 When coffee was introduced in Rwanda in 1904 by German missionaries, it almost immediately became a staple crop for the country, with it greatly increasing in production by farmers around 1930. However, the quality of the coffee was considered very low grade.Eventually, Rwanda began mostly growing a high grade coffee comprised of an Arabica/Bourbon varietal (about 95% of the coffee plants), and only the remaining 5% were Catuai and Caturra varietals.Today, Rwanda is Africa’s ninth largest producer, and crops are cultivated off around 450,000 small farms that are comprised of about 1 hectare each and 165 coffee trees.

Coffee is grown from between 1200 to 1800 meters high, and is harvested between March and July of each year. Once the coffee is harvested, it is taken to local communal washing stations shared by regional farmers, to undergo wet processing before roasting and selling.

When the coffee is right, which it most often is, Rwandan coffee has a very silky, creamy, and buttery taste that also have floral and citrus notes. There is also a sweetness to the coffee that resembles caramelized sugar cane, cinnamon, clove, and allspice. Rwandan coffee is thought to be pretty consistent in character to East African coffees, such as from Kenya and Zimbabwe.