You are here: Home / All About Beans / Former President Clinton Donates $700,000 to Farms in Haiti 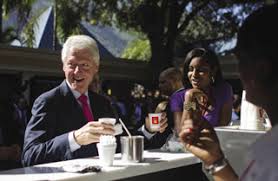 On Monday, the Clinton Foundation, founded and headed by former president Bill Clinton, announced that it would be awarding more than $700,000 to help develop the agricultural sector of Haiti. Funds will be divided between efforts to plant trees, build coffee farms, and train farmers.

Clinton told the Associated Press, “The country has been beat down so long and the controversies are so familiar to people that it’s sometimes too easy to see the down side. I’m not naive. I know what the down side is. This is a place of staggering potential.”

Since shortly before the devastating earthquake in 2010, Clinton has been the United Nations’ special envoy to Haiti.

Clinton’s foundation also visited a Heineken brewery that the company purchased last year, and has decided to invest $40 million to help with brewery expansions and help the farmers who supply the factory with sorghum used in brewing.

While this will help the agricultural industry, analysts are still warning that the country is being held back by a banking system that is too old fashioned and a highly dysfunctional justice system that often provides little legal certainty for investors. There are also security concerns for travelers, as well as inadequate infrastructure and a cholera epidemic.